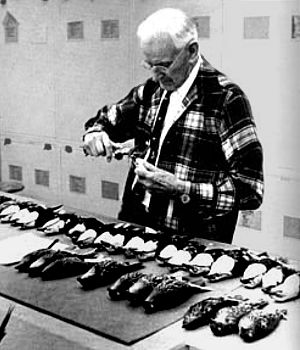 Frank Alexander Wetmore (whose first name was never used) became a prominent ornithologist and avian paleontologist. Early in his career, he was hired as bird taxidermist at what is now known as the Denver Museum of Natural History, Colorado in 1909.

Shortly thereafter, Wetmore held positions with the U.S. Bureau of Biological Survey, Department of Agriculture (1910-1924). He began bird banding as a part of waterfowl management in 1913, when he studied avian botulism at Utah's Bear River Marshes. Wetmore banded nearly 1,000 ducks, and through subsequent band reports determined that the birds affected by botulism came from areas far beyond the borders of Utah. Further studying the lead poisoning of waterfowl, previously known since 1894, Alexander Wetmore demonstrated that ducks die after eating lead shot (1914-1915).

Wetmore was appointed in 1925 as Assistant Secretary of the Smithsonian Institution in charge of the U.S. National Museum, the National Gallery of Art, and the National Zoo. A colleague described Wetmore as a “tall man of quietly distinguished presence and great natural modesty.” Although jackets were not required apparel for men after World War I, employees tended to put them on before entering Wetmore's office.

Observations and records produced by Wetmore have lasting value. For example, Wetmore's 1927 work indicated that the yellow-shouldered blackbird once occurred throughout Puerto Rico, although more commonly in the coastal zone. Today, the U.S. Fish and Wildlife Service can compare that with its current population and give it endangered status. (Federal Register, November 19, 1976)

He was the first of the avian paleontologists to visit Hagerman Fossil Beds National Monument, as the leading student of fossil birds during the first three-quarters of this century. The fossil bird bones collected during the Smithsonian expeditions did not remain forgotten in a drawer. In 1933 Wetmore described the bird material collected from 1929 to 1931. [Excerpted from: The Fossil Record, Spring 1997]

During his life Wetmore was widely travelled; he had served with the Biological Survey, participating in field investigations throughout the United States as well as in Canada. Puerto Rico, Mexico, South America, and the islands of the mid-Pacific. An ornithologist with interests similar to those of the late Spencer Baird, Wetmore was a voluminous contributor to biological journals, and he became an expert on the birds of Central and South America. He authored several several books, including A Checklist of the Fossil and Prehistoric Birds of North America and the West Indies. (1940, 1956); The Birds of the Republic of Panama (1968); and a detailed account of 60 members of the woodpecker family.

An owl, the symbol of Athena, graces this ancient Greek coin and serves today as the Smithsonian Secretary's badge of office. (source)

Wetmore decided to step down in 1952, when he believed it was the right time turn the position over to a new person who could introduce a fresher perspective. "In his quiet way," Paul Oehser wrote in The Auk a quarterly journal of ornithology, “Wetmore had, since assuming the position of Secretary in 1945, following more or less the traditional patterns of his predecessors, fostered the Institution's laboratory and field researches in natural history, anthropology, and industrial arts...(and) laid the foundations of expanding the exhibits, buildings, and programs that came to fruition in later administrations.”

Subsequently, Wetmore extended an impressive list of achievements, for he continued his research at the Smithsonian for another quarter century, until he died in 1978.


Written by Webmaster about 2002, or earlier, from various sources. Some of these are provided as links in the article.