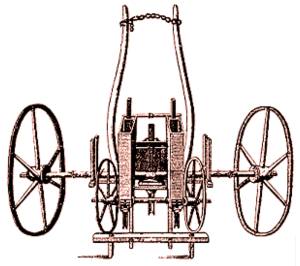 Jethro Tull was a gentleman of an ancient family in Yorkshire, which had been seated in the county of Oxford, and possessed a landed estate there. He was born on the paternal property in that county, but not known at what precise date of time. He was educated at one of our universities, adopted the legal profession, became a member of Staple Inn, and was called to the bar in December, 1693, by the benchers of Gray's Inn, though generally said at the Temple in most accounts of his life. He made the tour of Europe, and was a keen observer of the soil, culture, and vegetable productions of the countries which he traverses. On his return to England, he married, and settled on his paternal farm in Oxfordshire, where he began to introduce a number of agricultural experiments, among which he contracted a pulmonary affection, which sent him to Montpelier to seek a cure in the mild latitudes of Italy and the South and France. Here he attended most diligently to the culture of those countries—writing facts and drawing inferences with a very keen and ardent speculation, He returned to England with repaired health but a dilapidated fortune - part of the Oxford estate was sold before his departure, and he now settled with his family on a farm of his own, called “Prosperous Farm,” near Hungerford, in Berkshire, where he adopted the firm resolution to perfect his former experimental undertakings.

Mr Tull had very early observed the chance practice of gardeners in planting beans in rows, and in Lombardy he saw leguminous crops hoed and cleaned of weeds by means of the seeds falling into the seams of wide ploughing, and rising in rows or drills, which had descended as practice from the ancient Romans. He conceived that all plants used for crops should be placed in rows, and hence came the theory of drilling the ground for being planted. Tull had also noticed the great benefits if the soil being pulverized, or minutely severed in the particles; he had read on the subject, as the observation was as old as any records exist. On these two principles he set to work on his farm, and experienced the usual difficulties that attend all new undertakings. The soil of the farm was not favorable to the drill cultivation; the old implements were unsuitable and clumsy; the workmen were awkward and unwilling, and, as usual, would break the new implements in order to continue the lazy working of the old ones. In the midst of these difficulties the expenses were much enhanced, and the usual condemnation was passed on the absurd attempt. But the utility became evident, and Tull was induced by the neighboring gentlemen who saw its value, to publish his theory, which he did in 1731, in folio, price 6d., called “New horse-hoeing husbandry, or an essay on the principles of tillage and vegetation.” This work was only a specimen, and was followed in 1753 by “Horse-hoeing husbandry,” folio, price 10s. It has lately undergone some alterations and additions, and was published by Mr. Cobbett in 1829. Tull died in January, 1740, at his seat at Prosperous Farm. He had a son, John Tull, who proved an adventurous genius, being a good mechanic, and had various success in different inventions. He first introduced into England the travelling by post-horses, for which he obtained a patent in 1737. He served in the army, resumed his schemes, and, not having capital to forward the undertakings, he was arrested for debt, and died in prison in 1764. His exit is often erroneously attributed to his father, who ended his days on the farm in Berkshire, as above stated.

Jethro Tull commenced his system of husbandry by making the ridgelets of land three feet apart, and planting upon each ridge two rows of vegetables in a nine-inch distance. The wide intervals were wrought by the horse-hoe, and the narrow ones by hand-tool. It does not appear that his ideas ever advanced beyond this conception, or that he had ever contemplated the uniform ridging of land over extensive fields. His construction of new implements would necessarily be imperfect, as all new ideas must be on almost any point, and hence had the bad success of that, and most similar undertakings, where many influences concur to present an opposition. Ardent temperaments are generally deficient in the solidarity that is required for an efficient practice, and it needs much longer time than the life-term of the one individual to bring into any degree of perfection the attempts of genius, however they may be plausible and easy of attachment. Tull succeeded as well as circumstances would allow—his means, time of life, nature of soil and climate, unmatured state of ideas, and the customary oppositions. He showed a grand principle, and left to others the development of its action.

Our author derived the idea of sowing grains by machine from the rotary mechanism of an organ, which laid the foundation of all sowing implements. His drilling of land produced every ridging of ground that has been done, and his ideas of the pulverisation of soil superseding the use of manures have led to the continued practice of reducing land to the finest possible state. It required more loamy soils than are found in South Britain, and a cooler climate, with more frequent rains and dews, to show the full value of Tull's conceptions on the drilling of green crops. Where he operated the main elements were against him, as is now evinced by the best modern practice. On the other hand, the drilling of grains succeed well in dry climates; but the placing of these vegetables in rows yet remains to be of doubtful value. Tull's practice died with him; but his book got into the hands of Tweedside farmers, one of whom failed in his attempts to establish the system on unfavorable soil, and the other succeeded on gravelly loams, and pushed a most unexampled success. The Norfolk two-horse plough led to the single drilling of land, and Tull's hoeing and scarifying of land by frequent movements of the soil have completed the modern system of green-crop cultivation.

The name of Tull will ever descend to posterity as one of the greatest luminaries, if not the very greatest benefactor, that British agriculture has the pride to acknowledge. His example furnishes the vast advantages of educated men directing their attention to the cultivation of the soil, as they bring enlightened minds to bear upon its practice, and look at the object in a naked point of view, being divested of the dogmas and trammels of the craft with which the practitioners of routine are inexpungnably provided and entrenched. His system most completely revolutionised the whole practice of British agriculture - a proud prominence certainly for any individual to attain. The full benefits have not yet been derived, for the clay lands remain to be subdued by the action of pulverization after the loamy soils and light lands have been exhausted by the application.

Tull pushed his theory to the extreme of supposing that a very minute pulverization of the soil would supersede the use of manure, and that the process would enable the land to produce a continued succession of crops in any kind of the suitable plants, even of the same vegetable in the yearly growth. Experience has not yet sanctioned this result; but if Tull failed to show this extreme use of pulverization in superseding the use of manures, he has amply succeeded in proving a comminuted condition of the soil to be very highly favourable to the action of fertilizing substance. It is an inherent quality of genius to make erratic strides; and as the danger of mistakes is ever much greater than the means of avoiding them, a satisfaction must be entertained when the success bears any tangible degree with the failures. In Tull's case the ratio is large and the fall insignificant.

Amateurs in farming yet make pilgrimages to the “Prosperous” farm of Jethro Tull, where the out-buildings remain in some part of the houses as they were used by the father of the drill husbandry. The dwelling-house is modernized, and the locality is found in the parish of Shalbourne, under the Coomb Hills, about four miles south of Hungerford. No stone or memorial of any kind marks the grave of Tull — it is even unknown where his mortal remains were laid. Such was the reward of a genius which was always genuine, and never went to bed.


Image added (not in original article) from Jethro Tull, Horse-Hoeing Husbandry (1752), 378, Plate 4, Fig. 21. Text from: John Donaldson, Agricultural Biography: Containing a Notice of the Life and Writings of the British Authors on Agriculture from the earliest date in 1480 to the present time (1854), 48-50. (source)