The Danish chemist, Julius Thomsen (1826-1909) was born the son of a bank auditor, in Copenhagen, Denmark on 16 February 1826. His academic life also centred around Copenhagen. His master's degree was from the University of Copenhagen (1843), where he then joined the faculty teaching chemistry, becoming a professor in 1866.

He was also active in the community, as a member of the city's Municipal Council for thirty-five years. In this capacity, he brought about significant improvements in the city's water, gas and sewage utilities.

THOMSEN AND PERIODICITY OF THE ELEMENTS

Julius Thomsen first suggested the modern long form layout of the Periodic Table. He indicated that the periods - horizontal rows - should each end at an element of valency zero, namely those elements now known as the noble gases.

“Julius Thomsen, of Copenhagen, in a paper published in 1895 entitled On the Probability of the Existence of a Group of Inactive Elements, pointed out, in relation to Mendeleéeff's Law of Periodicity, that in periodic functions the change from negative to positive value, or the reverse, can take place only by a passage through zero or through infinity; in the first case the change is gradual, and in the second case it is sudden. The first case corresponds with the gradual change in electrical character with rising atomic weight in the separate series of the periodic system, and the second case corresponds with a passage from one series to the next. It therefore appears that the passage from one series to the next in the periodic system should take place through an element which is electrically indifferent. The valency of such an element would be zero, and therefore in this respect also it would represent a transitional stage in the passage from the univalent electronegative elements of the seventh to the univalent electropositive elements of the first group. This indicates the possible existence of a group of inactive elements with the atomic weights 4, 20, 36, 84, 132 numbers corresponding fairly closely with the atomic weights respectively of helium, neon, argon, krypton, and xenon.”

Thomsen was born the son of a bank auditor, in Copenhagen, Denmark on 16 February 1826. His academic life also centred around Copenhagen. His master's degree was from the University of Copenhagen (1843), where he then joined the faculty teaching chemistry, becoming a professor in 1866.

He was also active in the community, as a member of the city's Municipal Council for thirty-five years. In this capacity, he brought about significant improvements in the city's water, gas and sewage utilities.

THOMSEN, THERMOCHEMISTRY AND THE DAVY MEDAL

The thermochemical measurements he made were done independently of, but paralleled, the work of French chemist Marcelin Berthelot. Thomsen carefully measured and made tables of the amount of heat released or absorbed in approximately 3,500 chemical reactions.

A spontaneous chemical reaction would be one that moved in only one direction and would give off heat while doing so. Conversely, if such a reaction were to be forced into reverse, it would be necessary to absorb heat. (Lavoisier and Laplace were the first to hold such views).

For example, hydrogen and oxygen combine to form water, and conversely, water can decompose into hydrogen and oxygen. The formation of water gives off a great deal of heat very rapidly, even explosively. Such a reaction would be regarded as spontaneous, since once started, it goes rapidly to completion.

Conversely, for water to decompose into hydrogen and oxygen requires an input of energy (such as heat or electricity). The breakdown of the water molecule would be regarded as not spontaneous, since it is not seen to occur at all until there is a continuous supply of energy and once started, the reaction ceases immediately without the energy input.

As it would be recognized by later workers, such a simplified view of chemical reactions is incorrect for two reasons.

1. Not all spontaneous reactions give off heat. Some draw heat from the surroundings, which accordingly register a drop in temperature.

2. There are reversible reactions

. Thus, substances A and B can react spontaneously and be converted to substances C and D, while C and D can, just as spontaneously, react back to A and B. Such reactions are indicated with reversible arrows:
A + B <–—> C + D
For example, hydrogen iodide may break down into a mixture of hydrogen and iodine, whereas the mixture may recombine to form hydrogen iodine:
2HI <–—> H2 + I2

It still remained for other chemists to recognize that it is the influence of concentration - not even just the different masses of the reactants present - that determines chemical kinetics.

“The thermo-chemical researches of Berthelot and Thomsen have extended over many years, and have involved an immense amount of work, partly in the application of established methods to new cases, partly in devising new methods and applying them to cases in which the older methods were not applicable. Chemists had identified a vast variety of substances, and had determined the exact composition of nearly all of them, but of the forces which held together the elements of each compound they knew but little. It was known that certain elements combine with one another with great evolution of heat-forming products in which they are firmly united; while other elements combine but feebly, and with little evolution of heat. But the materials for forming any general theory of the forces of chemical combination were but scanty and imperfect.

“The labours of Messrs. Berthelot and Thomsen have done much towards supplying that want, and they will be of the utmost value for the advancement of chemical science.”

Thomsen was the first to make measurements of the relative strengths of acids. 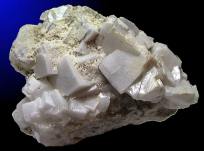 Thomsen was also adept at applied chemistry. In 1853, he patented a process to manufacture sodium carbonate from the mineral cryolite (Na3AlF6, sodium aluminum fluoride).

At the time, this mineral was found only on west coast of Greenland, a Danish colony, and had no other practical use. He became prosperous from the proceeds of this patent.

(Later, in 1886, the American chemist Charles Hall was to use this mineral in the first inexpensive method to produce aluminium from its oxide in bauxite ore, with an electrolytic process utilizing molten cryolite to dissolve the aluminium oxide. Modern production of alumium uses artificially synthesized sodium aluminum fluoride, since the mineral is in relatively short supply compared to the huge tonnage of the metal now processed.)