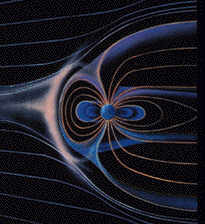 High-energy pulses of solar wind from sunspot activity (solar bursts or plasma bubbles) travel from the Sun to the Earth at speeds exceeding 500 miles/sec. The pulses distort the Earth's magnetic field and produce geomagnetic storms that disrupt the Earth's environment. (source)

Edward Sabine was an Irish geophysicist, astronomer, and explorer, who made extensive pendulum measurements to determine the shape of the earth, and established magnetic observatories to relate sunspot activity with disturbances in terrestrial magnetism.

Sabine was educated at the Royal Military Academy, Woolwich, London, commissioned in the Royal Artillery, served in Gibraltar and Canada, and eventually rose to the rank of major-general in 1859, retiring in 1877.

In 1818, he travelled as the expedition’s astronomer with his friend, Sir Clark Ross, to find the North-West Passage. He also joined the 1819-20 Arctic expedition of William Parry. During 1821-23, Sabine travelled in the Southern hemisphere, using careful pendulum experiments to determine the shape of the earth.

As director of an international project to collect measurements of the earth’s magnetic field, beginning in 1839, he established a number of observatories worldwide. In 1839, he founded The Toronto Magnetic and Meteorological Observatory, the oldest scientific institution in Canada. Correlating the accumulated data from these institutions, together with measurements of sunspot activity made by German astronomer, Samuel Schwabe, Sabine saw an important relationship.

On 6 April 1852, Sabine announced that the 11 year sunspot cycle was “absolutely identical” with the geomagnetic cycle. Later, using a larger dataset, Rudolf Wolf confirmed this fact. Since Newton’s explanation of the effect of the sun’s gravity on earth, this was the first new phenomenon of the sun interacting with the earth. Thus began continuing studies of the solar-terrestrial activity.

During the 1840’s, he was involved with reforms of the Royal Society. He was also active with the British Society for the Advancement of Science. His political maneuvering caused great emnity from some scientists. He was even accused by some of falsifying data, though he may only have been naïve in using numbers.*