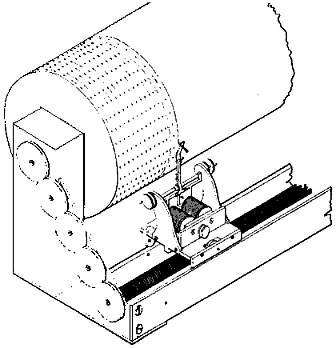 The Naval Observatory depended on the accurate determination of time when recording stellar positions. To have a method more accurate than the practice of a human observing a clock. John Locke fitted an existing astronomical clock with a circuit-breaking device and by late Nov 1848 had devised a practical way to register both time and an observed event on the same record. At first, Locke called it his “magnetic clock.”

When in Dec 1848 he was notified by Locke, the first Superintendent of the U.S. Naval Observatory, Navy Commander Matthew Fontaine Maury, immediately recognized the significance of Locke’s device, calling it “one of the most important inventions of the age.” He promptly wrote to John Mason, the Secretary of the Navy, enthusing, “The discovery consists in the invention of a magnetic clock, by means of which seconds of time may be divided into hundredths with as much accuracy and precision as the machinist, with rule and compass, can sub-divide an inch of space. Nor do its powers end here. They are such that the astronomer in New Orleans. St. Louis. Boston, and in every other place to which the magnetic telegraph reaches, may make his observations, and, at the same moment, cause this clock, here in Washington, to record the instant with wonderful precision. Thus the astronomer in Boston observes the transit of a star as it flits through the field of his instrument, and crosses the meridian of that place. Instead of looking at a clock before him, and noting the time in the usual way, he touches a [telegraph] key; and the clock here subdivides his seconds to the minutest fraction, and records the time with unerring accuracy. The astronomer in Washington waits for the same star to cross his meridian, and, as it does, Dr. Locke’s magnetic clock is again touched; it divides the seconds, and records the time for him with equal precision. The difference between these two times is the longitude of Boston from the meridian of Washington.”

Maury suggested a new name for the clock - the “electro-chronograph” (later referred to more simply as a chronograph.) Maury arranged for a $10,000 payment to Locke for the use of the instrument at the Observatory.

The recording apparatus of John Locke’s Electro-Chronograph consists of a paper-covered rotating cylinder, with a pen which allowed an event to be registered to within hundredths of a second. This was a ten-fold improvement in accuracy over prior equipment.

The diagram of the recording apparatus part of John Locke’s Electro-Chronograph comes from a plate in his Report of Professor John Locke, of Cincinnati, Ohio, on the Invention and Construction of His Electro-Chronograph for the National Observatory, in Pursuance of the Act of Congress, Approved March 3, 1849. (source)

The Great Astronomical Clock, or “Electro-Chronograph” is placed in the same room with the Transit-Instrument, and is used in connection with it to denote sidereal time. It was invented by Professor John Locke, of Cincinnati, and is one of the most remarkable instruments in the world. By means of an electrical battery in the building, the movements of this clock can be repeated by telegraph in any city or town in the land to which the wires extend. With the wires connected with it, its ticks may be heard in any part of the country, and it will record the time so accurately than an astronomer in Portland or New Orleans can tell with exactness the time of day by this clock. It also regulates the time for the city. There is a flag-staff on top of the dome, upon which a black ball is hoisted at ten minutes before noon, every day. This is to warn persons desiring to know the exact time to examine their watches and clocks. Just as the clock records the hour of twelve, the ball drops, and thus informs the city that it is high noon.

[How the electro-chronograph was used in astronomical and longitude measurements]

The automatic registration of time observations by means of electro-magnetism is an improvement in practical astronomy due to American ingenuity. The merit of its first suggestion has been somewhat in dispute, but the earliest experimental demonstration of its feasibility was certainly made by Professor John Locke, of Cincinnati and Pittsburgh. The distance is four hundred miles, and the experiment was continued for two hours, during which the beats were regularly registered at every station throughout the whole line. The application to astronomical observation immediately followed. In recognition of the value of this invention, Congress awarded to Dr. Locke the sum of ten thousand dollars, and ordered a clock of the same description to be constructed for the Naval Observatory. As a recording instrument, the ordinary telegraphic register of Professor Morse was at first employed. More convenient forms of apparatus were subsequently devised by Professor Mitchell, Mr. Joseph Saxton, of the Coast Survey, and Messrs. W.C. and George P. Bond, who introduced the regulator which has since been so almost universally employed in these instruments, known as Bond’s spring governor. More recently (1871) a printing chronograph has been invented by Professor George W. Hough, of the Dudley Observatory, which records to the hundredths of a second, and saves to the observer who employs it the labor and time required for deciphering and recording in figures the indications of the register in common use. The electro-magnetic method of recording transits was adopted without delay in the observatories of the United States and soon after found its way into those of Great Britain and the continent of Europe, where it was known as the American method. Of its great value in promoting accuracy it is not necessary to speak; but only those who can adequately appreciate the degree to which it has lightened the labor of the observer. Previously to its introduction the clock divided with the object viewed the observer’s attention, and the necessity for unceasing vigilance was exhausting in the extreme. If nothing else had been gained by it but this, the benefit would be incalculable.

The introduction of the electric chronograph into observatories furnished a very simple means of determining differences of longitude between any two places connected by a telegraph wire. These determinations are made by comparing the exact times of transit of a given celestial object over the meridians of both places, a single clock giving the times for both, or by transmitting time signals alternately in opposite directions compared with clocks at both ends. The earliest observations of this kind were made in January, 1849, between Washington and Cambridge, Massachusetts. The method has since been brought into very extensive use throughout the world. In 1867 and again in 1871 and in 1872, it was employed to determine the difference of longitude between Greenwich and Washington, by means, in the first instance, of the Anglo-American cable, and, in the second and third, of the French, from Brest to St. Pierre, and Danbury, Massachusetts. It may be interesting to compare those results with those of the great chronometric expeditions of 1849 and 1855 between Cambridge and Liverpool—expeditions which, in the words of Mr. W.C. Bond, “for the magnitude and completeness of their equipments have not been equaled by any of the similar undertakings of European governments. Even the ‘Expedition Chronometrique’ of Struve was on a scale much less extensive.” In 1855 fifty-two nautical chronometers were transported six times between Cambridge and Liverpool, giving nearly three hundred individual longitude determinations. The difference of longitude obtained was 4h. 44m. 30.6s., showing a difference between the two of 1.2s. The cable results (omitting hours and minutes) were: 1867, 31.00s.; 1871, 30.96s; 1872, 30.99s., and the largest discrepancy being only four one-hundredths of a second.

In observing for longitude, the velocity of propagation of electric impulses in the wires of the circuit becomes a matter requiring attention, and thus the telegraph has become the means of throwing light upon this interesting question in physics. The results obtained have differed very widely, being dependent on differences of material of the conductor, differences of cross-section, and largely upon differences of surrounding conditions. In the ordinary iron wires of the American telegraphic lines the velocity seems not to exceed fifteen or sixteen thousand miles per second.