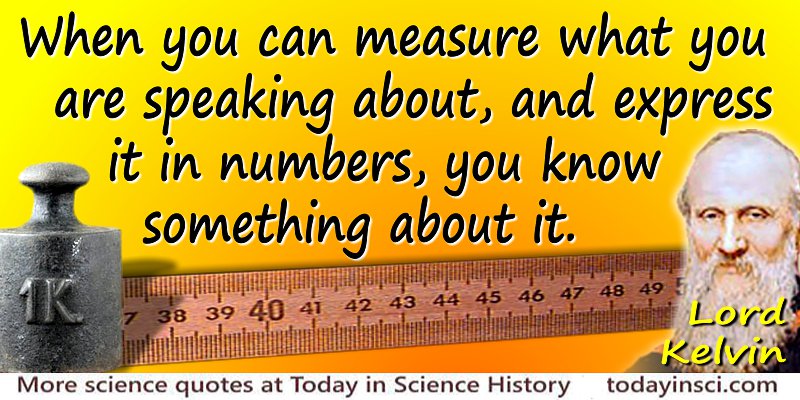 “When you can measure what you are speaking about, and express it in numbers, you know something about it.”
— William Thomson Kelvin
From lecture to Institution of Civil Engineers (1883).

Lord Kelvin delivered a lecture on “Electrical Units of Measurement” to the Institution of Civil Engneers on 3 May 1883, one of a series of six on “The Practical Applications of Electricity.” Since his topic concerned units, which are essential to measurement, Kelvin began this lecture by saying:

“In physical science a first essential step in the direction of learning any subject is to find principles of numerical reckoning and practicable methods for measuring some quality connected with it. I often say that when you can measure what you are speaking about, and express it in numbers, you know something about it; but when you cannot measure it, when you cannot express it in numbers, your knowledge is of a meagre and unsatisfactory kind; it may be the beginning of knowledge, but you have scarcely in your thoughts advanced to the stage of science, whatever the matter may be.”

This idea is often seen quoted in a condensed form: “If you cannot measure it, then it is not science,” though Kelvin himself left no record of expressing it in these few words.

It was in this same lecture that Kelvin remarked:

“The life and soul of science is its practical application, and just as the great advances in mathematics have been made through the desire of discovering the solution of problems which were of a highly practical kind in mathematical science, so in physical science many of the greatest advances that have been made from the beginning of the world to the present time have been made in the earnest desire to turn the knowledge of the properties of matter to some purpose useful to mankind.”