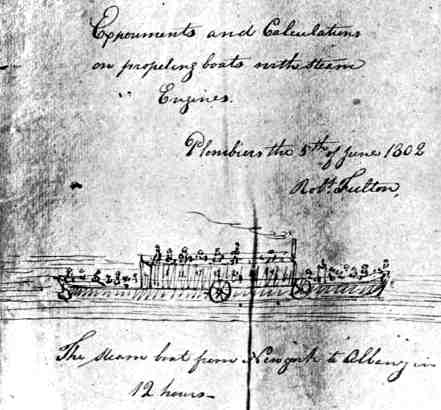 FULTON'S FIRST PROPHECY OF STEAM NAVIGATION ON THE HUDSON
[This drawing, titled The steam boat from Newyork to Albany in 12 hours, is on the title-page of the inventor's note-book, Experiments and calculations on propeling boats with Steam Engines, while at the French city of Plombiers 5th of June 1802. The notebook was held by the estate of Fulton's daughter, Cornelia Livingston Crary. The drawing remained unpublished until included in the book by Alice Crary Sutcliffe in 1909.] (source)

[p.338]    ...The United States Patent Office has recently stated that while the Index of Patents says that on February 9, 1811, a patent was issued to Robert Fulton, the office is unable to furnish a copy of it, as the records of this and other early patents were destroyed in the Patent [p.339] Office fire of 1836. It is well established, however, that Fulton's first United States patent was obtained February 11, 1809, and a supplementary patent February 9, 1811.

In his Notes on the Patent of 1809, in possession of one of his heirs, Fulton claimed that the essential parts of his invention of the steam-boat were fourteen in number:

“First: The mode of communicating the power from the piston rod of the engine to the water wheels without the common beam and in such a manner as not to strain or impair the boat.

Second: I am the first who discovered the superiority of water wheels over other modes for gaining a purchase on the water, and I am the first who applied water wheels to a steam boat. They are described in the specification, one on each side of the boat and their number of arms, diameter, and size of propelling boards minutely detailed.

Third: The wheel guards around them are also detailed.

Fifth: The bow and stern should be sharp to angles of at least 60 degrees. The bow should not be full like sloops, for two reasons; that being long they cannot rise on the waves like sloops but must cut through them, and being sharp the resistance is less.

Sixth: After mentioning the combinations the success in building a steamboat depends upon knowing how to calculate the resistances, the proportions, and velocities of the parts and for this purpose the rules are laid down exact, in

Seventh: A table of the resistance of the water and how to calculate the total resistance of the boat while running from one to six miles an hour, unless this be first ascertained it would be impossible to tell what strength of steam engine would be required.

Eighth: The specifications show the power necessary to drive the boat and the power consumed by taking the purchase on the water and thus arriving at the whole power required the power of the steam engine may be calculated.

Ninth: Shows the size of the cylinder, the piston running two feet a second.

[p.341] Tenth: Shows the diameter and velocity of the water-wheels.

Eleventh: Shows the size of the propelling boards.

Twelfth: I am the first who combined sails with steam to drive a boat.

Thirteenth: Shows the steering wheel and pilot near the middle of the boat and over the station of the engineer.

Fourteenth: How to get the merchandise in steamboats up rapids.”