from The New American Cyclopaedia: A Popular Dictionary of General Knowledge (1858) 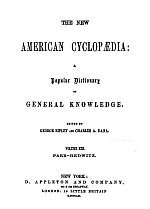 [p.403] Several patents have been granted in England to Mr John Fowler, and prizes also (one of 500 sovereigns in 1859) have been awarded for his methods of ploughing by means of one or two steam engines. In the former case the engine, having two upright drums or capstans, is set at a point in the field which may be called the apex of the triangular space occupied by the apparatus. At each of the other angles is set a guide pulley through which a strong wire rope passes from one of the drums to the other, and, the furrow being run through, the motion is reversed and the ploughs are run back in the other direction. Eight and even 12 ploughs have been worked on the single rope, half of them pointing in one direction and the other half in the other. They are attached to a frame which is balanced upon the axle of a carriage, and is moved up and down like a see-saw. The guide pulleys are moved as required to reach the unploughed portion of the field. In the use of two engines, one was placed at each end of the furrow and the endless wire rope was employed, which was passed several times around the drum of each engine, and thus the ploughs between them were drawn in either direction by their joint action. They were held in place by being attached to low trucks loaded with earth, and having thin sharp wheels which penetrated into the ground. These were easily moved along the margin across the ends of the furrows as ploughing proceeded, but were not readily drawn sidewise from their places.

from The Gentleman's Magazine (Jan 1865) 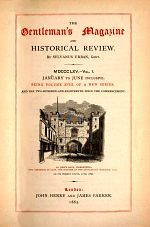 [p.123] At Ackworth, Yorkshire, Mr. John Fowler, of Leeds, and Cornhill, London, and formerly of Melksham, Wilts., the inventor of the steam-plough. The deceased, who was only 38 years of age, married a daughter of Mr. Jos. Pease, formerly member for the county of Durham, who survives him, together with five young children. His great manufacturing works at Hunslet, originally begun in con-junction with Mr. Kitson and the late Mr. Hewitson, will be carried on by his partners. The “North British Agriculturalist” says: “The rapid development of the use of steam cultivation since 1859 is partly due to the fact that the war in America directed attention in Egypt and elsewhere to the cultivation of the cotton plant, and during the last two or three years the principal orders for steam cultivators have come from Egypt. Upwards of 300 of Mr. Fowler's apparatus are also at work in various parts of the United Kingdom. For more than twelve months the number of engines sent out from Mr. Fowler's manufactory at Leeds has been at the rate of about six per week. We may add that his death was the result of tetanus, caused by a fracture of his arm got while hunting. The strain upon his mind had brought on nervous excitement, and he was recommended to take as much outdoor exercise as possible. He first tried long walks, and finally resorted to hunting, and while in the field he met the fall that resulted fatally.”