Dian Fossey - The dignity of the gorilla 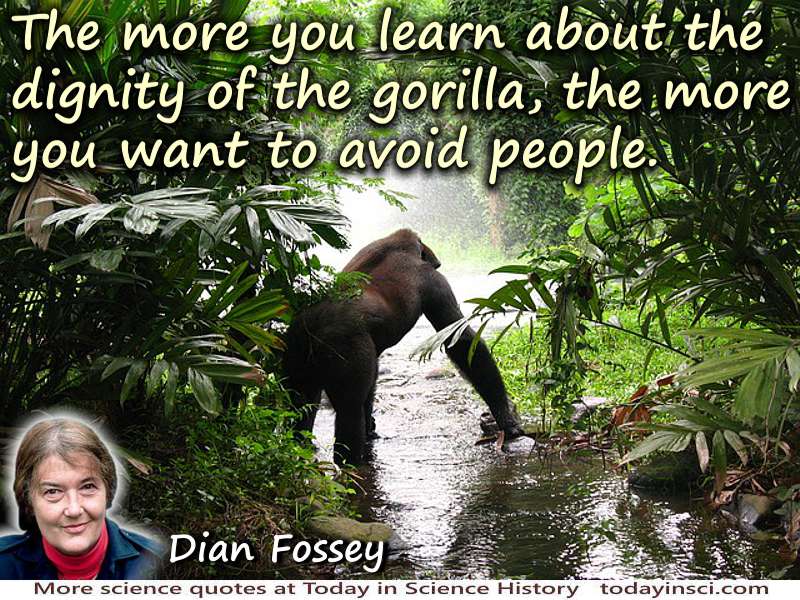 “The more you learn about the dignity of the gorilla, the more you want to avoid people.”
— Dian Fossey
As quoted in Los Angeles Times.

This quote comes from the last interview before her death that Dian Fossey gave to a visiting journalist, the Associated Press East Africa Correspondent. Barry Shlachter, travelling in Rwanda, visited Dian Fossey in May 1985, at her Karisoke Research Station in the Virunga Mountains. Shortly after her murder on 27 Dec 1985, Shlachter rewrote the account of his meeting with Fossey, published as a “Special to the Philadelphia Inquirer” on 12 Jan 1986. The quote originally appeared in his first article about the meeting syndicated by AP the previous summer (1985).

During the interview with Fossey, recalled Shlachter, “Her raspy voice and difficult breathing were due to emphysema, which she said was in an advanced stage,” which wasn't helped by “puffing continuously on her local Impala brand of cigarettes.” She was too sick to carry out research, but still was able to supervise anti-poaching patrols.

She cared very much for the gorillas she studied, and had established a well-tended burial ground adjacent to her home. Thirteen wooden markers were inscribed with the names of gorillas interred there. Twelve of them were killed by poachers.

Fossey was often inhospitable to even white outsiders and by extreme actions, she had created animosities among the local people. About searching for a guide to take him up the mountain to find Fossey’s cabin, Shlachter wrote, “Many local Rwandans said they feared going near Fossey… They called her Nyiramachabelli, which in the Kinryanda language means, ‘The Old Lady Who Lives in the Forest Without a Man.’”

Concluding his frank account of how Fossey had become a controversial figure in the year before she died, Shlachter quoted her own words, which she had confided without regret:

“I have no friends. The more you learn about the dignity of the gorilla, the more you want to avoid people.”

Following her wishes, Dian Fossey was laid to rest on 31 Dec 1985, in the gorilla cemetery with her beloved gorillas. Like them, she had been killed.


Text by Webmaster, with quotes from Barry Shlachter, 'Fossey: An Expert Nearly As Elusive As Her Subjects', The Philadelphia Inquirer (12 Jan 1986). The dignity of the gorilla quote appeared the previous summer of 1985 in Shlachter's original description of his visit with Fossey, that was syndicated by AP. It appeared, for example, titled 'Woman Fierce Protector of Gorilla Friends', in Lawrence Journal-World (29 Jul 1985), 7. (source)