ALVIN J. FELLOWS, OF NEW HAVEN, CONNECTICUT.
Letters Patent No. 79,965, dated July 14, 1868.
IMPROVEMENT IN TAPE MEASURES.
The Schedule referred to in these Letters Patent and making part of the same. 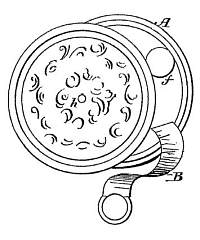 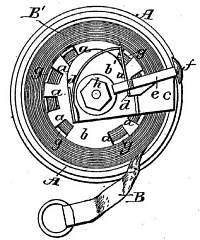 TO ALL WHOM IT MAY CONCERN:

Be it known that I, Alvin J. Fellows, of the city and county of New Haven, in the State of Connecticut, have invented a new and useful Improvement in Spring Measuring Tapes; and I do hereby declare that the following is a full, clear, and exact description of the construction, character, and operation of the same, reference being had to the accompanying drawings, which make part of this specification, in which —

Figure 1 is an enlarged perspective view of the apparatus as it will appear when ready for use.

Figure 2 is a plan of the same, with the movable side taken off, showing the internal structure of the apparatus.

My improvement consists in the manner of fitting the spring-click which detains the main or primary spring to the central part of the main-spring barrel, so as to hold the tape at any desired position.

I make the case, A, fig. 1, and A A, fig. 2, of gum-lac and saw-dust, or any other analogous substances, and color it with ivory-black, or any other suitable matter, to suit the taste or market.

On this stud or arbor h, and outside of the head b of the main-spring barrel, I fit a piece of sheet metal as b', in such a position that its outer end will rest in the periphery of the case, as shown at c, fig. 2.

I am aware that metallic cases have been used with the same kind of main-spring, and with a click-spring attached to the removable side or cap of the case, by being soldered to its inner surfaces, and a knob attached to the outer surface of the said removable side, to release the click, and allow the tape to be drawn in by the mainspring; I therefore do not claim any such device, but

What I claim as my invention, and desire to secure by Letters Patent, is—

The combination of the case A with the plate b', click-spring d d', and the arm e, and knob f, when the whole is constructed, arranged, and fitted for use, substantially as herein described.