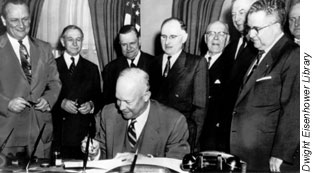 In this photo, President Eisenhower signs the Federal-Aid Highway Act of 1954. There was no similar photo for the landmark Federal-Aid Highway Act of 1956 because Eisenhower was in hospital when he signed the bill on 29 Jun 1956. He was recovering from surgery at the Water Reed Medical Center, so despite the momentous significance of the Act, there was no ceremony and no photographer present. (source)

On Friday, 29 June 1956, President Eisenhower kicked off the largest road-building program in the history of the U.S.A. Of the $33,480,000,000 total cost, a large share of the cost would be met by the federal government, with much smaller matching contributions from the states He signed the Federal-Aid Highway Act of 1956, a bipartisan bill sent to him by Congress three days earlier in the week, which authorized the expenditure.

There was no ceremony or photographer present because he signed it where he was recovering from surgery at the Walter Reed Medical Center in Washington, D.C. The President was highly “pleased,” reported the White House press secretary, James C. Hagerty, as he announced that the bill had been signed. Earlier Federal-Aid Highway Acts of 1952 and 1954 had been totally inadequate to build an effective national network. But the President had been a strong advocate for this ambitious plan for the country, and finally, in June 1956, the means were in place.

The Secretary of Commerce, Sinclair Weeks, called it “the greatest public-works program in the history of the world.” He also announced that he had instructed the Bureau of Public Roads to expedite the start of process. He anticipated new construction to be under way within the next two to three months.

A network of 41,000 miles of limited-access roads–the interstate system–had been planned to link 90 percent of cities with populations over 50,000 people. For this, the Federal Government would provide $25,000,000 during the following 13 years, which would cover 90 per cent of the cost, to states matching with the other 10 per cent. Thus no special highway bonds would be needed.

Such a huge project, Secretary Weeks said, would not only be a major boost to the nation’s economy, but would also bring the benefits of reduced traffic congestion, with the saving of thousands of lives on roads built for greater safety.

The Associated General Contractors of America were eager to get started, and predicted that the first $100,000,000 in contracts would be awarded by the end of September. The survey undertaken by the organization indicated four times that amount would be allocated by the end of the year. 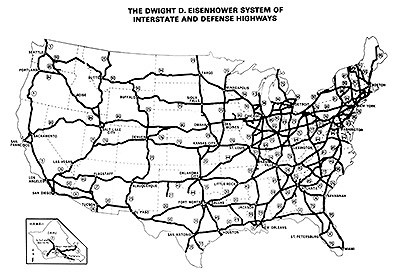 For government income to balance such a huge outlay, the bill raised highway user taxes. Effective on Sunday, 1 July (two days after the bill was signed) for sixteen years, the existing 2 cents per gallon tax on motor fuels was to increase to 3 cents. The federal tax on tires was to rise from 5 cents per pound to 8 cents. The excise tax on trucks, buses and trailers would change from 8 per cent of the manufacturer’s price to 10 per cent. Also, a new annual levy of $1.50 per 1,000 pounds. was placed on heavy trucks and buses.

Of the total Federal appropriations of $28,057,000,000, the interstate system would use $25,000,000. The balance was to provide a three-year increase in other Federal highway aid, for park, forest and other federally funded roads. The matching contribution from states was to be $5,425,000,000. The Federal appropriation represented three times the former annual Federal outlay for the road program.

Secretary Weeks announced that the first year’s distribution to the states would be $1,125,000,000, which allocated one billion dollars for interstate projects, plus $125 million for other primary, secondary feeder and urban highways.

The Associated General Contractors (an organization including most of the road building contractors in America) expected that, quoting the reporter in the same newspaper, “the program would reach peak levels by 1960 with total highway, road and street construction ranging between $8,000,000,000 and $9,000,000,000 a year.”

Then, by the organization’s reported estimate, workers involved in the direct construction of the road system would number a monthly average of 435,000 to 450,000 (up from 300,000 before the project). A similar increase was also expected in the associated transportation, administration and production of the construction materials from mines, forests and factories.