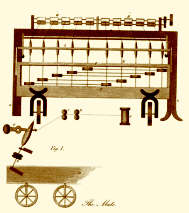 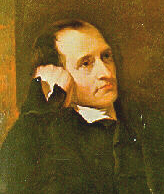 Crompton was born at Firwood Fold, near Bolton, England. He was 15 when he started working on a spinning jenny in the Hall'i'th'Wood1 mill, Bolton. The yarn then in use was soft, and broke frequently. He realized that an improved machine was needed. By 1774, at age 21, he began working on that project in his spare time, and continued for five years. He later wrote2 that he was in a

“continual endeavour to realise a more perfect principle of spinning; and though often baffled, I as often renewed the attempt, and at length succeeded to my utmost desire, at the expense of every shilling I had in the world.”

During this time, he supplemented his income from weaving, when the Bolton theatre was open, by earning eighteen pence a night as a violinist in the orchestra.

Because of the machine-wrecking Luddites active during the Industrial Revolution, he worked as best he could in secret while developing the machine. At one point, he kept it hidden in the roof of his house. (Luddites were handloom workers who violently rejected the changes produced by the Industrial Revolution, and destroyed mechanised looms, in their attempt to protect their livelihoods during harsh economic conditions.)

In 1779, his invention was finished - the spinning mule. It was able to spin a continuous, strong, fine yarn by combining ideas from the spinning jenny of Richard Arkwright and the water frame of James Hargreaves. The “mule” name came from being a hybrid.

For lack of funds, he failed to patent the machine. Although it was a boon for them, once the device was made public, the cotton manufacturers took advantage of it, having given only trivial compensation for the rights to its inventor. Lancashire's textile manufacturers achieved a five fold increase in production. England's greater exports of fine cotton cloth brought prosperity.

The first, hand-operated mules used at home were followed in the 1790s with larger factory versions built with as many as 400 spindles. The Spinning Mule could also be driven by the new James Watt steam engines. Large numbers of factory owners installed copies of Crompton's mule. 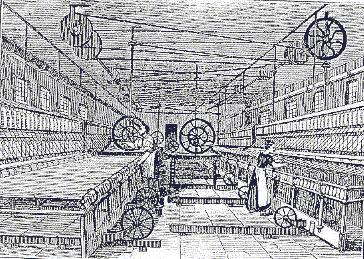 Having sold the rights to his machine, long before, Crompton was unable to benefit. He spent the rest of his life seeking compensation for his invention.

Robert Peel did respond to a petition to Parliament on 24 Jun 1812, with a reward of £5,000, thought even this was not sufficient to clear the debts from Crompton's ventures. (Peel himself came from a family of Lancashire weavers that progressed into textile manufacturing and made their fortune.)

Crompton died in poverty, at his home in Bolton, on 26 Jun 1827, aged 72. The Latin inscription on his gravestone reads: “Mors Ultimo Linea Rerum Est.”—“Death is the last boundary of human affairs.”

The community of Bolton eventually recognized his contribution to their industry 35 years later, when public contributions paid for his statue, which was unveiled on 24 Sep 1862.

1 Hall'i'th'Wood is a local colloquial contraction of “Hall in the Wood.”

2 'Extract from a manuscript document circulated by Crompton about the year 1809 or 1810', reprinted in The Basis of Mr. Samuel Crompton’s Claims to a Second Remuneration for his Discovery of the Mule Spinning Machine, (1868), 29.