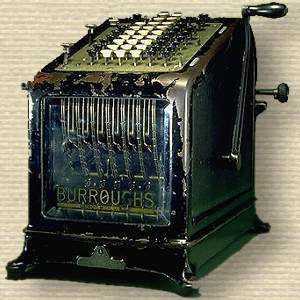 [p.557] There is no story in American industrial history more absorbing, more replete with human interest, than the story of the inventor of the adding machine and his years of disheartening labor to perfect his creation. The immense manufactory known as the Burroughs Adding Machine Company, with its 12,000 employes, its vast organization, and its yearly output of over 125,000 calculating machines, is built upon the dreams, the ambitions, the creative genius and the struggles of one man, whose name is now perpetuated in the title of the company.

William Seward Burroughs was the son of a mechanic and was born in Rochester, N. Y., January 28, 1857. While he was still a small lad, his parents moved to Auburn, N. Y., where he and his brothers were educated in the public schools. According to the father's desire that his youngest son should choose a “gentleman's” vocation, young Burroughs, after his graduation from high school, entered the Cayuga County National Bank of Auburn as a clerk. This was not in accordance with the young man's wishes, for he had a natural love and talent for mechanics and the boredom and monotony of clerical life weighed heavily upon him. Seven years in the bank caused his health to break and he was forced to resign.

During the time he was employed in the bank, Burroughs had recognized the need of some system or device to relieve the tiresome duties of a bank clerk. A mechanism for this purpose did not at first assume form in his mind, but the germ of the idea was created. In 1882, when he was in his twenty-fifth year, Burroughs went to St. Louis, Mo., where he obtained a job in a machine shop. These new surroundings, which appealed to him more, hastened the development of the idea he had in mind and the tools of his new craft gave him the opportunity to put into tangible form the first conception of the adding machine. Accuracy was the foundation of his work. No ordinary materials were good enough for his creation. His drawings were made on metal plates which could not stretch or shrink by the smallest fraction of an inch. He worked with hardened tools, sharpened to finest points, and when he struck a center or drew a line, it was done under a microscope. His drawings are today a marvel of accuracy.

Burroughs gave up his regular employment and looked around for a small, well-equipped shop where he could rent bench space and obtain an assistant to carry on his work. He finally located the shop of Joseph Boyer, at 244 Dickson Street, where he set up his tools and started out to make the adding machine commercially practical. His funds soon disappeared, but the development of the idea did not lag, the chief reason being that Burroughs had met Joseph Boyer, who, next to the inventor himself, was the greatest factor in making the present industry a possibility.

Seldom has an inventor with a great idea been compelled to struggle under such conditions as faced Burroughs during the time he was developing his ideas for the first practical adding machine. With every penny of his own money and all he could borrow spent, he still fought on. He set out himself to raise [p.558] money by the sale of stock in the projected enterprise. With this money he would then begin his experiments again, but about the time he was well under way, the bottom would drop out of the treasury. However, at the Boyer shop, activities continued unabated in spite of these obstacles. A small organization was built up, which made in brass the adding machine parts which the inventor desired. Finally, in the latter part of 1884, the first model of the machine was displayed and was the basis for the Burroughs patents, which were secured in 1885.

There now came a protracted period of new discouragements. The first machines proved unsatisfactory, principally because the human equation had not been taken into account. One person would operate with a heavier touch than another, consequently the results obtained on the machine varied. The stockholders complained and the general opinion was formed that the new machine was a failure. But the setback was only a whip to Burrough's determination. He began work again notwithstanding the fact that he was upon the verge of a physical breakdown. In fact, he did all of his earlier work under the handicap of gradually declining health. He knew himself and his endurance as well as he knew the ultimate value of his brain-child, so in feverish desperation he set about to remedy the defect in his first model. At his bench he toiled for hours, without food or sleep, and on the morning of the third day he had eliminated the one great defect by an automatic controller, or dashpot, substantially the same as is used today on all adding machines. With this addition, the machine became practical, in that it could be operated by even a novice.

Then came the problem of manufacturing and selling the machines. In January, 1888, there was organized at St. Louis the American Arithmometer Company, which was incorporated with a capital stock of $100,000. The original officers were: Thomas Metcalfe, president; William S. Burroughs, vice president; Richard M. Scruggs, treasurer; and A. H. B. Oliver, secretary. William R. Pye was also one of the original stockholders. A contract was entered into with the Boyer Machine Company for the manufacture of the device, the selling operations were established and from time to time different models were put out, the beginning of the long line of models now manufactured. Twice, while in St. Louis, the company was compelled to enlarge its floor space, in order to fill the increasing number of orders for the machines.

In 1904 conditions seemed to favor the removal of the plant from St. Louis. Trade union domination in that city was a restriction upon the proper development of the concern, also Joseph Boyer used his influence to accomplish this removal to a more advantageous location. Special trains brought the machinery, together with 253 families, to Detroit, arriving here in the afternoon. By means of arrangements made through the real estate committee of the board of commerce, most of the people were comfortably housed the same night, many of them in places which they afterwards bought. This was one of the most remarkable “hegiras” in manufacturing history.

The Burroughs Adding Machine Company, organized in Detroit, was incorporated in January, 1905, and succeeded the American Arithmometer Company. The first buildings in Detroit, located at Second Avenue and Amsterdam Street, contained 70,304 square feet of floor space, but the increase in production and sales has been such that these quarters have been enlarged from time to time until now there are 894,895 square feet of floor space in the Detroit [p.561] factory alone. The first officers of the new company were: Joseph Boyer, President; Henry Wood, of St. Louis, Vice President; Benjamin G. Chapman, Secretary and Treasurer; Alvan Macauley, General Manager. New models were continually added. Conspicuous among these were the electric drive, developed in 1905; the Duplex machine, put on the market in 1910; automatic carriages, introduced to meet the demand for cross tabulating of numbers and amounts, and a long line of subtracting, bookkeeping and calculating machines. Burroughs himself did not live to see the wonderful development of his invention and its tremendous popularity, but he did live to see hundreds of practical machines of the early model used in the banks of the country, and to reap a substantial reward from his original holdings in the company. His death occurred September 14, 1898.

Joseph Boyer became president of the old company in 1902 and of the new company upon its organization, and so continued until 1920. Alvan Macauley became general manager of the business in 1902 and was actively in charge of it until 1910 when he became associated with the Packard Motor Car Company, of which he is now President and General Manager. He was succeeded by Andrew J. Lauver. Benjamin G. Chapman, a1so in 1902, became a director and was elected Secretary and Treasurer, serving the old and the new companies successively in that capacity until his retirement from business in 1920. In 1913 Claiborne W. Gooch, formerly European Manager, became a director and the active Vice President, in which capacity he was in charge of the business until 1920. In January, 1920, Standish Backus, a prominent attorney of Detroit, who had for several years been a Vice President and a member of the Board, was elected President and became active in the business, while Joseph Boyer became Chairman of the Board, retaining, however, his active interest in the business.

The Company now has an issued capital stock amounting to $24,750,000 par value, and an authorized capital stock of $30,000,000. It controls the following subsidiary companies: Burroughs Adding Machine Limited, a. British Corporation which conducts the manufacturing and selling activities of the Company in Great Britain and under whose supervision its European operations are directed; Burroughs Machines Limited and Burroughs Adding Machine of Canada Limited, two Canadian Corporations which supply the Canadian and part of the foreign demand; Societe Anonyme Burroughs which operates with headquarters at Paris, France; Societa Italiana Addizionatrice Burroughs, with headquarters at Milan, Italy; Sociedad Anonima Burroughs with headquarters at Barcelona, Spain; the General Adding Machine Exchange, Inc., and the Moon-Hopkins Company. The business of the Moon-Hopkins Billing Machine Company, of St. Louis, Mo., was acquired in 1921 and its product added to the long line of Burroughs models.

Besides its Detroit factory the Company owns and operates manufacturing plants in Windsor, Ontario, and Nottingham, England. In normal times the Company affords employment to upwards of 10,000 persons. The selling organization reaches into nearly all civilized countries with agencies in some 400 important business centers of the world, of which more than half are in the United States.