[This encyclopedia article was originally written about George Brayton's engine in 1875, three years after he was issued a patent for it. Brayton had previously worked improving steam engines, for which he held an earlier patent. The illustration shows a marked resemblance to a steam engine with its rocking beam and flywheel. Notice that his engine needed no spark plug - it had a continuously burning flame to ignite each cycle of the engine. The article reveals that for a few years, Brayton's engine was well regarded, but within a short time the Otto engine became more popular.] 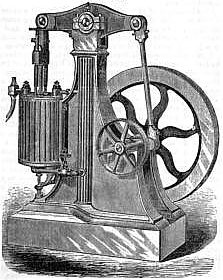 ...A very different judgement must be pronounced upon an an American invention patented by George B. Brayton Apr. 2, 1872, and known as Brayton's Ready Motor, in which petroleum is the fuel ordinarily used, though it was originally designed for gas. This engine employs, like those already described, a mixture of gas or vapor with atmospheric air in explosive proportions - say one part of the former to twelve of the latter - but, unlike the others, it burns this mixture in the cylinder without explosion, and expends upon the piston the energy derived from its combustion with the same steady pressure as that exerted by steam-engine or by rarefied air in the hot-air engine. This remarkable effect is produced by the simple expedient of delivering the gaseous mixture into the cylinder through the meshes of a separating sheet of wire-gauze, and inflaming the mixture on the surface of the gauze next to the cylinder. The same phenomenon occurs here which is seen in Davy's safety lamp. When the lamp is lighted and immersed in an explosive mixture, the gas which passes through the meshes of the wire-gauze cap burns quietly in the interior, so that the whole cap seems to be full of flame; but the gauze effectually prevents this flame from reaching and igniting the mixture outside. So in this engine, the flame is confined to the cylinder and is prevented by the wire-gauze from running back through the passages and exploding the mixture in the reservoir. For greater security, two or three successive screens are introduced.

As this engine is evidently destined to occupy a very important place in many industries, it seems to deserve a more particular description than we have given to those previously mentioned. Fig. 1 presents a perspective elevation showing the cylinder, working beam, fly-wheel, and driving-pulley with certain pipes the purpose of which will be better understood from Figure 2. This figure shows a section of the cylinder, piston and valves of which there are four. As the engine is only single-acting, the upper valves a and b may for the moment be disregarded. The induction valve is a, and the exhaust valve v. The valve a admits the combustible mixture to enter by the pipe S through the shallow chamber H, in which are placed the wire-gauze diaphragms k, k, into the cylinder beneath the piston. Through the valve-seat there is made a small perforation which may be closed more or less nearly by the pointed screw c. The pipe S is that which, in Fig. 1 carries the screw-valve between the cylinder and a reservoir within the fluted column, in which a certain quantity of the combustible mixture is contained under pressure. When the screw-valve is opened, the gas, entering through S, makes its way by the small aperture in the valve-seat at c into the shallow chamber H. When it is desired to set the engine in motion, the piston is brought near the bottom of the cylinder by turning the fly-wheel, and a lighted match is introduced from without into the chamber H by an aperture not shown, which is then closed. The gas in H takes fire, and as the supply is continuous it continues to burn. The fly-wheel is then turned a little further so as to open the induction-valve, when the engine immediately begins to operate. Its motion can only be arrested by cutting off the supply by means of the screw-valve. 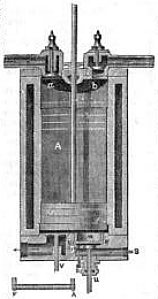 We will now give attention to the valves at the top of the cylinder. The left-hand valve communicates with a gasometer which itself supplies through two inlets - one introducing atmospheric air and the other inflammable gas, in the proportion of twelve to one. As the piston descends, the cylinder behind it is filled through a with this explosive mixture. As it reascends, the valve a closes and b opens, the charge in A being forced through this into the reservoir from which the supply of the cylinder is drawn. The upper part of the cylinder is somewhat enlarged, so that when the piston is at its highest point, there still remains in it a quantity of gas equal to about one charge. It is easily seen that, if the cut-off is placed low, the volume of gas admitted at each stroke will be proportionally less than that driven into the reservoir; but as it is also obvious that, after running a short time, the mass of gas drawn out in a given time, must be exactly equal to that forced in the same time, the pressure under which the engine works may be increased by shortening the cut-off, or by diminishing the length of it.

To prepare the engine to start, it is obvious that a certain pressure must first be got up to the reservoir. This need be only sufficient to set the engine running. After it has once started it will regulate itself, and will soon create the pressure due to the length of the cut-off. In small engines, this preliminary pressure may be got up by a few turns of the fly-wheel. For large ones a force-pump must be used; but once got up, there is no need that it should be run down. If the valves are close, even in long intervals of repose. As the reservoir has the capacity of only three or four charges, it is not great labor to prepare it.

The efficiency of this engine is due to the expansion of the air introduced, and of the products of combustion (carbonic acid and steam) by the heat generated in the same combustion. The pressure in the cylinder is no greater than that in the reservoir. The opposing pressure is at first only that of the atmosphere, but rises toward the end of the stroke to be equal to that in the reservoir. The action of the engine therefore in every respect resembles that of a hot-air engine; and it is to this class, rather than to the class of gas-engines, that it properly belongs. Though hot-air engines are in theory the most economical of engines driven by heat, the economy of theory has never been realized from them in practice, in consequence of the extreme difficulty of imparting heat to the air. Radiant heat in this case produces but little effect: and to heat air thoroughly by contact requires a complicated construction which seriously impedes circulation and increases the resistance of friction. The Brayton motor has practically resolved this difficulty, by mingling the fuel with the air itself, so that the whole heat of combustion is imparted to the air directly. It is therefore a hot-air engine without a furnace, or one in which the furnace is the cylinder.

When the economical performance of this engine was tested, it was found that the consumption of gas amounted to 32 cubic feet per horse-power per hour: being less than that of the Otto and Langen engine by about 18 per cent. But the steadiness of action of this engine adapts it to high as well as low powers; and it works silently, while the one just mentioned creates an intolerable din. It is obvious that the Brayton engine might be made double-acting by employing separate pumps for the reservoir.

Since this article was originally prepared (1875) a new form of gas-engine has been constructed by Mr. Otto, one of the patentees of the Otto and Langen engine, above described, in which the objection to that engine - viz. The noise produced by it in working - has been wholly overcome. It is known as the "Otto silent gas-engine." In this the working cylinder is horizontal, and its length is much less than the original Otto and Langen engine. It is preferred to the Brayton motor by some who have used both, but it is rather more expensive; and in localities where public gasworks do not exist its running-cost is likely to be against it. When circumstances favor, it seems to be regarded as the most advantageous form of gas-engine yet produced.