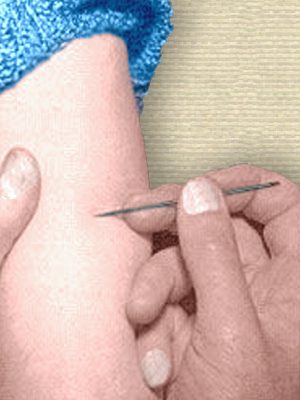 A smallpox epidemic struck Boston, Mass., in May 1721, and continued through the year.

At the time, Reverend Cotton Mather lived in Boston had known of the practice of inoculation since 1706. A slave, Onesimus, had explained to him how he had been inoculated as a child in Africa. The practice was an ancient one, and Mather was fascinated by the idea. He encouraged physicians to try it, without success. Then, at Mather's urging, one doctor, Zabdiel Boylston, was courageous enough to use the procedure.

On Monday, 26 June 1721, Boylston applied the technique, initially on his only son, Thomas, and two slaves—one grown and one a boy. This was a history making event, introducing the practice of inoculation to the American colonies for the first time.

The procedure consisted of making a small wound and infecting it with pus taken from a smallpox sore, which caused the person to get a trivial case of the disease. The resulting illness was mild: Thomas and the slaves recovered by 4 July.

Beginning around 1000 A.D., the practice of “inoculation” was carried out in China and India. Powder from dried crusts of smallpox pustules was inhaled, or set into a scratch on the skin.

Around the fifteenth century, a practice of applying powdered smallpox “crusts” and inserting them with a pin or “poking” device into the skin (known as variolation) became quite common in the Middle East. However, the primary intent of variolation was that of “preserving” the beauty of their daughters and no mention was made of saving lives.

In 1717, Lady Mary Mortley Montagu, the wife of the British Ambassador to Turkey, had her son inoculated, possibly the first European to experience the procedure. She worked hard to bring inoculation to England, with some success, but against major opposition.

In a bitter controversy, the New England Courant published writers who opposed inoculation. John and his younger brother Benjamin Franklin worked at this newspaper print shop.There is no evidence for the beliefs of the Franklins concerning inoculation at this time, though John Franklin twice said that he would publish articles either for or against inoculation (4 Sept and 4 Dec).

Neither the Boston News-Letter nor the Boston Gazette would publish anything against inoculation.

The Boston populace, however, feared that inoculation spread, rather than prevented, the disease. Boylston and Mather encountered such bitter hostility, that the selectmen of the city forbade him to repeat the experiment. Foremost among his opponents was Dr. Douglas, a Scots physician, supported by the medical profession and the newspapers.

The following excerpts of opinion of many members of the medical profession and the clergy illustrate the reaction to the inoculation experiments of Dr. Zabdiel Boylston:

“...for a man to infect a family in the morning with smallpox and to pray to God in the evening against the disease is blasphemy; that the smallpox is ‘a judgment of God on the sins of the people,’ and that ‘to avert it is but to provoke him more;’ that inoculation is ‘an encroachment on the prerogatives of Jehovah, whose right it is to wound and smite.’”1

Among the mass of scriptural texts most remote from any possible bearing on the subject one was employed which was equally cogent against any use of healing means in any disease—the words of Hosea: “He hath torn, and he will heal us; he hath smitten, and he will bind us up.”

The violence of the opposing citizens knew no bounds; they insisted that inoculation was “poisoning,” and they urged the authorities to try Dr. Boylston for murder. So bitter was this opposition that Dr. Boylston's life was in danger; it was considered unsafe for him to be out of his house in the evening; a lighted grenade was even thrown into the house of Cotton Mather, who had favoured the new practice, and had sheltered another clergyman who had submitted himself to it.

To the honour of the Puritan clergy of New England, it should be said that many of them were Boylston's strongest supporters.At the very crisis of affairs six of the leading clergymen of Boston threw their influence on Boylston's side, for which the protested hurled charges of “unfaithfulness to the revealed law of God.”

In spite of fierce opposition, inoculation caught on for a time, and hundreds of people sought out Boylston. 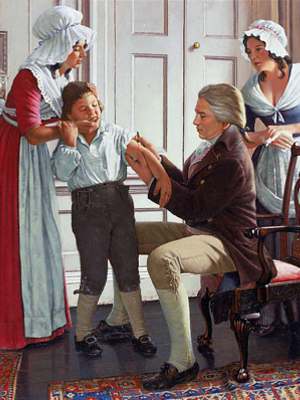 After inoculating Mr Edward Dorr, 35, and three of his children (ages 11, 5, and 3) on 24 Nov 1721, Boylston gave this vivid description of the melancholy sight of effects upon the family's by the next round of inoculations (29 Nov 1721):

“...I inoculated Mr. Edward Dorr's other three children, one of 9, and one of 7 years, and the other about 18 months old, his Servant Man 20, and Indian Girl about 17 years old. Mr. Dorr would have had these five inoculated when he and the three Children were, but I refus'd to do it then. But for the Convenience of nursing and having one Nurse for all of them, they were put into one Chamber, and for better Stowage, two or three in one Bed, (the End of the Chamber being partition'd off for a private Lodging, in which was laid the Indian Girl) and by the time the first three were broken out a Day or two, the other five began their Sickness. Here was a melancholy Sight indeed! I Had often three or four, but never nine in a Room together; the poor Children, with their Sickness and the Winter's Cold, prov'd forward, one crying, another coughing; one wanted Drink; another to do its Needs; one to get up, another to go to Bed, and so on; so that together with the opening and shutting the Doors; the gigling of the Warming-pan, Fire-shovel and Tongs, there was scarce a Minute in the 24 Hours that all was still and quiet. They all had the Smallpox at the usual Time, and of the distinct Sort: Mr Dorr was full, his Pock inflam'd, and his Fever too high: This, with his great Concern for his Children the continual Noise, the Want of Sleep, made the poor Gentleman almost distracted, which obliged me to bleed him twice, to apply Epispastics, use Anodines, Etc. at the turning of the Pock, the Symptoms went off.”2

The facts were soon very strong against the critics: within a year or two after the first experiment. Six of the 244 inoculated inhabitants (2.5%) compared with 844 of 5980 persons (14%) who died having contracted the disease naturally, accepted only the usual medical treatment.

After overcoming considerable difficulty and achieving notable success, Boylston traveled to London in 1724, published his results, and was elected to the Royal Society in 1726. Then he returned to Boston.

Some opposition continued. Not until Jenner's cowpox inoculation and its subsequent popularity did vaccination against smallpox receive acceptance.