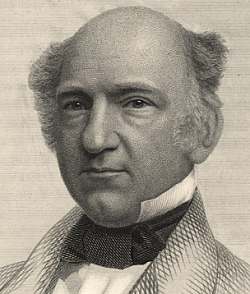 Erastus B. Bigelow, of Boston, one of the most eminent of American inventors, and the founder of the manufacturing town of Clinton, was born in West Boylston, Worcester county, Massachusetts, in the year 1814. His father was a man of limited means, and the son was early inured to toil. He worked for a time on a farm and in a cotton-mill, but before he was eighteen years of age he had invented a band loom for weaving Suspender Webbing, a machine for making “Piping Cord,” and had written and published a book on Stenography, or shorthand writing. His first important invention, however was a power-loom for weaving Counterpanes or Marseilles Quilts, before woven by hand, in which be was entirely successful; but in consequence of the failure of the firm who undertook to make it available, he realized nothing from this invention. This was followed by a power-loom for weaving Coach Lace, which may be said to have been the first of his inventions that brought him prominently into notice, as a number or capitalists united with him and his brother, Horatio N. Bigelow, for the purpose of building and running these looms and formed the association known as the “Clinton Company.”

The next task to which Mr. Bigelow applied himself was to invent a power-loom to weave Ingrain or Kidderminster Carpet. In this he also succeeded, triumphing over all difficulties; producing a loom, first put in operation in the Lowell Carpet Works that would weave with ease from twenty-five to twenty-seven yards per day, whereas the hand loom production never exceeded eight yards in a day. His latest and probably greatest invention was a power-loom for weaving Brussels Tapestry and Velvet Tapestry Carpets. Specimens of Brussels Carpet woven on this loom were exhibited in England at the Great Exhibition in 1851, and attracted much attention.

Nothing short of actual inspection can give any just idea of the wonderful capacities and life-like action of this machine. Some one attempting a description of it says:

“Wires three feet or more in length are here inserted and withdrawn with a precision and quickness which no manual dexterity ever attained. Let us watch the operation. First mark that intruding knife or wedge, which, as it rises, separates from its companions the wire next to be taken, and guides the pusher, which shoves it along toward the pincers. The pincers now walk up, grasp the wire, and draw it entirely out. While this is doing, another set of nippers, hanging down like two human hands, come forward, descend, and catch the wire at the moment when the drawing pincers drop their prey. No sooner have they seized the wire than they retreat to their original position, beneath which a small angular trough has just arrived. The fingers relax, and the wire drops into the trough, which immediately returns. Last of all, a triangular pusher, rushing through the trough, sends the rod into the open shed. Note, also, the double action of the withdrawing pincers, which, while they attend to their own special mission, perform also sergeant's duty by constantly bringing into line the draggling wires. Those bird-like three-fingered claws, which dart back and forth with such rapidity, are busy in plaiting the selvedge, and their work is perfect. These too are ‘contrived a double debt to pay,’ for whenever their thread breaks they instantly stop the loom.”

The town of Clinton, in Worcester county, Massachusetts, owes its growth and manufacturing importance principally to these inventions of Mr. Bigelow. The Coach Lace Works now owned by Messrs. Horstmann & Sons, of Philadelphia; the Lancaster Quilt Company, which turns out seventy thousand Counterpanes annually; the Bigelow Carpet Company, which produces one hundred and fifty thousand yards of the finest Brussels Carpets annually, are all the outgrowth and offspring of his genius.

Mr. Bigelow is still in the prime of intellectual vigor, and though now absent in Europe, his native country may yet confidently rely upon him for some new and important device in labor-saving machinery.